Authorized by Minnesota State Statute Sec. 462.354, the Planning Commission consists of a seven-member citizen board appointed by the City Council that reviews planning-specific requests before providing a formal recommendation to the Council. Commissioners must be city residents, appointed by Council, and commit to serving a three-year term. Meetings are held the second Monday of each month at 7:00 P.M. in the Council Chambers. Please see our calendar for meeting dates and submission deadlines for Land Use Applications Planning Commission Calendar 2023 (PDF) . If a meeting date falls on a legal holiday, the meeting will be rescheduled to the second Tuesday. 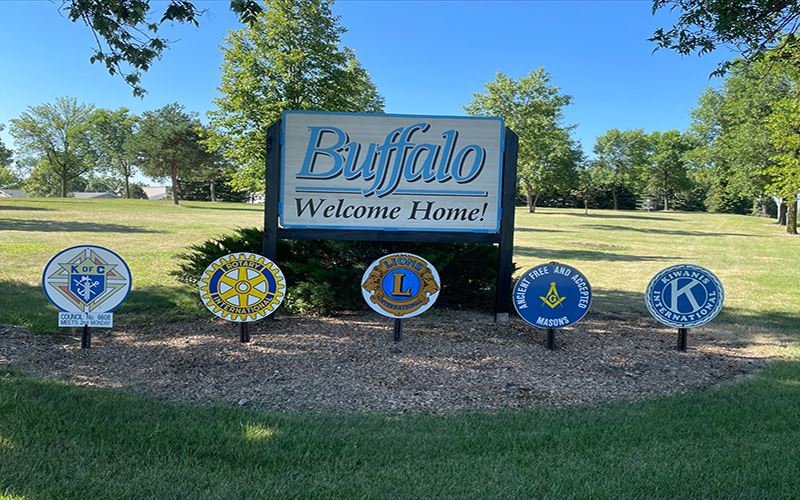 The City of Buffalo provides for the regulation of land use activities to create and maintain a high quality of life in our community. The Planning Commission reviews all land use applications, formulates a recommendation, and has the recommendation presented to the City Council at their regular meeting - typically on the third Monday of the month - where the Council will make the final decision on any request.

A Land Use Application (PDF) is required for all actions that come before the Planning Commission, including requests for Conditional Use Permits, Zoning Amendments, Variances,  and other general development items. Development fees are calculated according to the Master Fee Schedule (PDF).

A Conditional Use Permit is a document the City issues to allow a conditional use when the applicant meets general and specific ordinance standards. The purpose of this document is to provide the City with a reasonable degree of discretion in determining the suitability of certain designated uses upon the general welfare, public health, and safety of the residents. Generally, the Planning Commission is the entity tasked with considering all Conditional Use Permits in the context of the adjoining land or buildings, the effect upon traffic into and/or from the premises or on any adjoining roads, and other factors.

A variance is often sought by a landowner when they seek permission to vary from ordinance standards for a specific purpose. A variance may be approved only in instances where strict enforcement of the ordinance would cause ”practical difficulties” because of circumstances unique to the specific property under consideration. In addition, the City grants such variances only when it is demonstrated that such actions will be in keeping with the spirit and intent of the ordinance.

A Special Home Occupation (PDF) allows for a resident to operate a home-based business inside their residence that would otherwise not meet the requirements of a permitted home occupation as defined in Sec. 50-427 of the Code.

How does Development happen in Buffalo?

The development process in the city of Buffalo has several steps and includes extensive reviews by multiple City Advisory Boards and Commissions depending on the type of development.

If a proposal meets the existing zoning for a parcel and will not require any Variances or Conditional Use Permits for construction, the project will simply proceed through reviews by various City staff to ensure compliance with the Building Code, Zoning Code, and Fire Code. Once the proposal is deemed sufficient by City staff, construction can proceed.

If a proposal will require either a Zoning Amendment, Variance, Conditional Use Permit (CUP), or any combination of the three, it will be reviewed first by the Planning Commission and considered in the context of the City Code as well as the other factors stated above. As the Planning Commission is advisory and reports directly to the City Council, the Commission is not the final say on any specific request; rather, it will provide a formal recommendation either in favor or against an application that falls under its jurisdiction. As the Commission is tasked with providing a recommendation, the request will still go before the Council for final approval or denial- often at the next Council meeting after the Planning Commission meeting where the public hearing was held, and recommendation given. Once the proposal has obtained the necessary approvals and is deemed sufficient by City staff, construction can proceed.

If a proposal will result in the creation of more than two lots or a Planned Unit Development (PUD), additional reviews will be needed. Generally, an individual or team of developers will first meet with City staff to propose their idea and obtain initial feedback on the feasibility of their proposal. If the individual wishes to proceed with their proposal further, they will submit a Land Use Application to the City for their item to be reviewed by the Planning Commission- either in the form of a Concept Review, Preliminary Plat, or Development Stage PUD. While a Concept Review is not a required part of the process and no formal action is taken by the Commission, it is recommended that all proposals seek this review to make any adjustments prior to a Preliminary Plat or Development Stage PUD. If a concept is viewed favorably in this review and the applicant wishes to proceed further, the applicant will then submit a new Land Use Application for the Preliminary Plat or Development Stage PUD by the third Friday of the preceding month to be placed on the next Planning Commission meeting agenda. Prior to this meeting, and only when applicable, the applicants will have their proposal reviewed by the Parks Advisory Board to obtain their comments in accordance with Sec. 40-62 of the Code. With all required materials submitted and comments obtained from the Parks Advisory Board, the application will then be reviewed at the Planning Commission meeting in the form of a public hearing. Upon a favorable review by City Council of the Commission’s recommendation, the applicant will then make final adjustments to their proposal and submit additional information prior to applying for Final Plat approval. In accordance with Sec. 40-91 of the Code, a Final Plat will be reviewed and approved of only by Council, with the public hearing held at the time of review by Council. Once the proposal has obtained the necessary approvals, is deemed sufficient by City staff, and the Final Plat has been filed at the County, construction can proceed.

Please reach out to Community Planning & Economic Development Director David Kelly by email or phone with any additional questions.